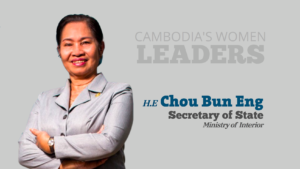 This is a single part of a series of stories of 21 women leaders of Cambodia. Download the full publication here.

Give a short introduction about your life (family, education, marital status) and how has your experience been as a leader and what achievements are you most proud of?

I was born in May 1956 in Battambang province of Cambodia. My mother was a teacher when she was young, but after she was married she became a housewife, while my father was a goldsmith and also a farmer. My mother had 10 children to take care of and my family was not wealthy. Two of my siblings died at a young age. That made me the third of eight children in my family. My sisters and brother did not get a higher education. My sister dropped out of primary education at the request of our parents, because our mother’s health deteriorated and no one else was able to take care of her while my father went to work away from home. My eldest brother also needed to give up his education after he graduated from lower secondary school. He became a soldier and died of illness in 1973, during the civil war. I was the only one in the family who was able to finish high school, which I did in 1974 at my homeland of Battambang, (my school was Battambang High School, formerly known as Preah Monivong High School). I continued studying at university in Phnom Penh, majoring in mathematics.

Unfortunately, because the war continued, I was not able to attend university and I decided to apply for a job at a Seng Thai Company. There, at the age of 19, I was given a senior leadership role as Chief of Warehouse and was in charge of four companies’ warehouses, under name of “Tissage Mechanic Seng Thai”, in Russey Keo district.

I like writing stories. During my high school, I wrote a couple of story books and sent them to the Department of Information in Phnom Penh. Those stories were been selected by Mr. Mao Bun Thorn, editor of the National Radio, to be broadcast weekly, on a series called “Legend Tales”. One of my story books recently attracted the attention of a movie company, which would like to purchase it to turn it into a film.

My bright time was over by the 17th of April, 1975. The regime of Pol Pot blocked my hope during my teenage years. I experienced working very hard, from place to place, time to time, not only in the community, but also at Pol Pot’s prison in Phnom Baseth, which was known as Prison 32nd Region. Even then, I was assigned to be a leader of women prisoners, perhaps because I was found to be honest and had leadership capacity. I finally entered into an arranged marriage in 1978 during the Pol Pot regime.

In 1983, I applied for a position as a school teacher and I went back to study mathematics at Phnom Penh University for a year. I began my career as a mathematics teacher at Daun Penh high School, (formerly known as Sisovath High School) in 1994, taking the time in the meanwhile to complete my Bachelors Degree at Royal Phnom Penh University. In 2010, I graduated with a Master’s in Political Science from Chamroeun University of Poly-Technique, and now I am an PhD candidate at Royal Academia.

After the first General Election in 1993, the Secretariat of Women’s Affairs was established and needed technical staff to run departments. I was selected to be Vice Director of the Department of Information, and I left my career as school teacher and began working at the Ministry of Women’s Affairs (MOWA) in 1994. In 1998 I was promoted to Inspector General.

In 1999, I was elected as member of the Commission for leading a Women’s Association, called the Cambodian Women’s Association for Peace and Development. Then I was selected to be Secretariat General and I fulfilled the role of Executive Director from 1999 and ran this association, until 2005, when I was recalled to work for MOWA, as Director General, in charge of three Departments: Women and Education, Women’s Health, and Legal Assistance to Women.

At the 4th mandate of the elected Government, 2008-2013, I was appointed by the Royal Government to be a Secretary of State at the Ministry of the Interior and I have remained in this position until now, in the 6th mandate, 2018-2023.

In this regard, I would like to share my opinion that Education and leadership with performance can promote us to take steps forward. As for myself, I was able to move from being a simple teacher to be a head of department, fulfilling a leadership role in both a Government ministry and civil society at the same time. Finally, I was able to be promoted to be a Secretary of State, and several other roles, such as a Vice President of the Cambodian Women Association for Peace and Development (CWPD), a Vice Chairperson of the National Committee for Countering Trafficking in persons (NCCT), a Vice Chairperson of the Cambodia National Council for Women (CNCW) as well as Vice Chairperson of the National Committee for Promoting Social Ethic and Family’s and Women’s Values. It all required extensive effort and time.

We women can be great leaders if we want to. So be courageous and let others know, hear and see your achievements.

When you first started out with your career, what were your most significant challenges?

Over the years, what valuable lessons have you learned as a leader?

I have my own life principles. I have to make my best efforts to overcome obstacles, and I prefer facing challenges and solving them. I have accepted that others have different ideas and I have learned to adapt to the situations I live in. In that way I am able to gain support and respect from others, in particular those I lead. I strongly believe that we must put trust in ourselves, ensuring that people around us realize that we can do our jobs. I was advised by my teachers that everyone has an obligation to be a good citizen. Good citizens are fundamental to building a good society. When we have a good society, our country will be prosperous. We can lead the society forward, if we build a united society. We can challenge each other, but for a clear direction and a common goal.

What are your core values and how do you ensure your team is aligned with your values?

What are some of the behaviors or traits that you think are negatively impacting leadership? 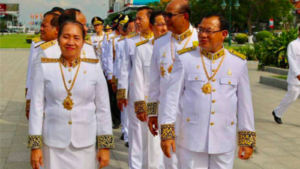 What are you doing to continue to excel as a leader (leadership tips in doing business and promoting women’s economic empowerment or gender equality)?

What makes Cambodia culture unique and how do you think Cambodia can thrive in this age of entrepreneurship & dynamic leadership?

We always think that entrepreneurship is not our Cambodian background. If we talk about business or entrepreneurship, we always think of the Chinese. But we Cambodians have to build entrepreneurship. Entrepreneurship can assist our people to be smarter in business, as well as unite them to assist each other in eliminating poverty. We need leadership skills in order to promote ourselves in international trade, and to upgrade our country‘s economy to be better and better.

What advice do you have for young Cambodian female entrepreneurs?

Cambodia is a matriarchal society. However, it is not always women who hold the highest positions. Whether women or men get the power to lead, it is vital for them to promote women’s values and human values. I always say that leaders must have a mother’s heart. Women have to prepare themselves well and make sure they are ready to take up roles and leadership positions. They have to know the direction they should follow and and share it with their followers or subordinates.

All women can be good leaders and entrepreneurs if we want to be. Be courageous and let others know of and observe your good performances and achievements!

This is a joint publication by Woomentum and Konrad Adenauer Stiftung. Download the full publication here.